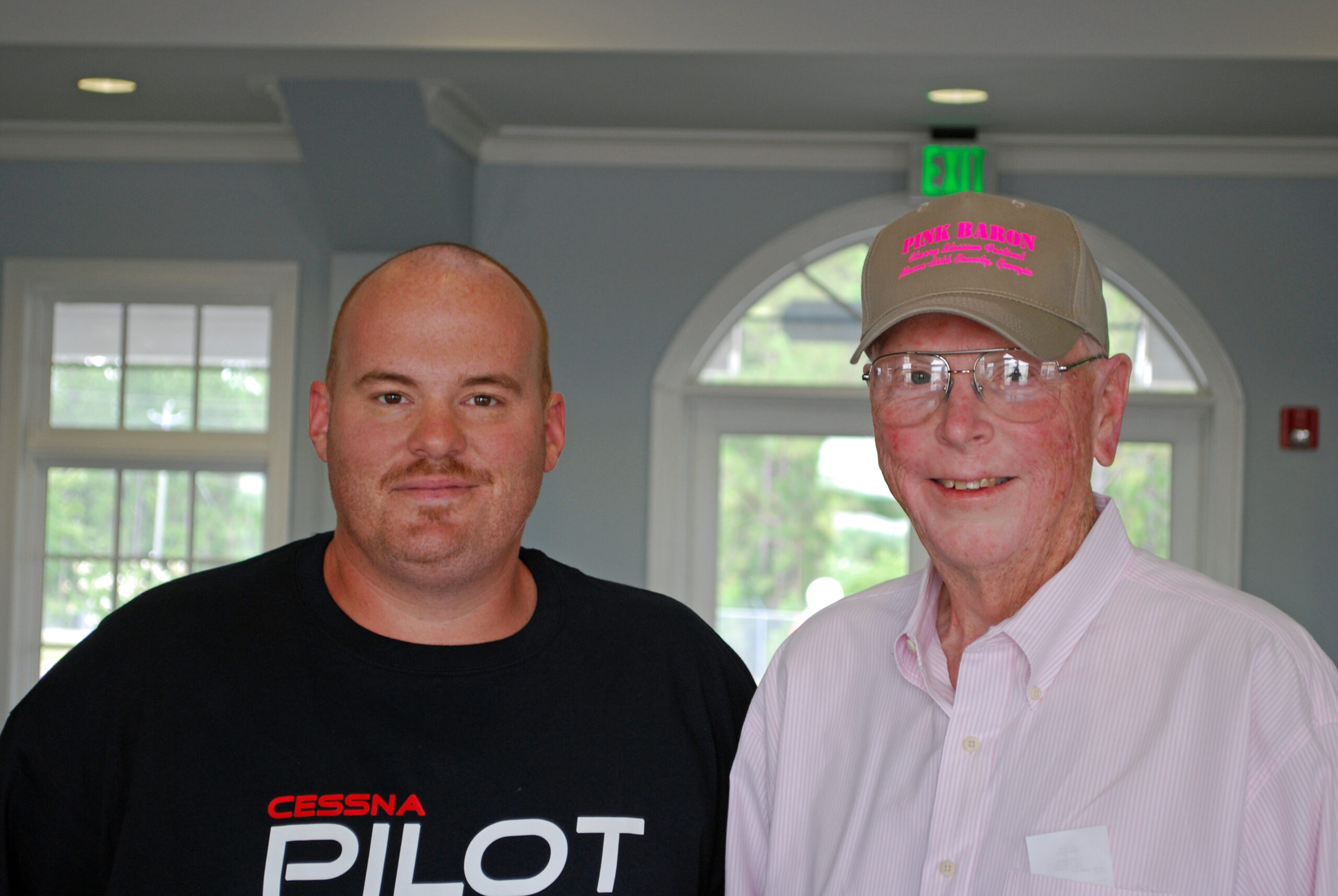 Your flying ambassador is back in the air promoting our CBF fall events. Any excuse will do to go up, but what a privilege it is to remind our neighbors that their festival is year-round. Recently, we flew into two very different airports within a 100 mile radius of Macon that circumscribe the area most of our local visitors are from.
Greg Cook was copilot on our flight to Cochran, Georgia (48A). Greg is a project manager by trade but loves—I mean really loves—flying. Greg has been flying all his life. As a small child his granddaddy sat him on Atlanta telephone books so he could reach the controls. It was a quick “yes!” when I asked him if he wanted to make a Pink Baron flight.
Greg and I both are amazed at God’s handiwork and there is no better place to marvel at His works than at cruise altitude once the airplane is trimmed and is on course. Even a high time pilot like Greg will muse “this is cool, so cool.”

The Cochran airport information indicated it was not attended after 1:00 p.m.; so when we arrived about 2:30 p.m., we were not surprised that no one was around. We walked around, got some pictures, and left some counter cards nearby.
Our flight back involved making some instrument approaches to Macon Downtown Airport (KMAC). ATC (Air Traffic Control) was pleasantly accommodating as we flew between Warner Robins (KWRB) and Macon Regional (KMCN) to begin our approaches. As I looked at the airports arrayed below, I thought of how Macon is blessed to have a system of airports to support this growing region of the state.
Although we anticipated no one would be at Cochran, we were disappointed not to get my PB flight jacket signed. So we planned a flight to Vidalia Regional (KVDI), which is attended. Gene Kitchings was the copilot on the trip to Vidalia.

Gene also loves flying and has recently returned to the cockpit after a hiatus of several years. He is having fun catching up and jumped at the chance to make the cross-country flight to KVDI.
The lineman, Billy Ragan, who flagged us in was great. He topped off our tanks, met us at Vidalia’s first-class terminal, and gladly displayed our CBF counter cards. The local government runs the airport and obviously takes pride in its “front door.”
Billy had lived in Macon and loved the festival. He remembered going to the air shows downtown. We have a supporter in Vidalia onion country. I hope to see him at Tunes and Balloons at Middle Georgia State University.
It is going to be a lot of fun. Catherine Harmon, CBF staff event coordinator, expects over nine balloons. Laura Starling, WDEN DJ, will start the entertainment at about 4:30 p.m. and bands begin performing beginning about 6:30 p.m. There will be inflatables for the kids to frolic on and great food vendors. Some of the balloon pilots will offer tethered rides. Bring the family and stay for the fireworks at the end.

I have to confess—this is fun. The joy that comes from sharing my love of flying and the festival with fellow pilots is uplifting. Seeing God’s handiwork as we reach out to our neighbors and realizing just how small our problems seem when we are at altitude whisking by the clouds is therapeutic. Soon we will be flying to another airfield spreading the word about our fall events. See you at Tunes and Balloons on Saturday, September 12th and Spirits in the Courtyard on October 8th.

The Cherry Blossom Festival celebrates 40 years with a new logo!

This year marks the 40th anniversary of The Pinkest Party on Earth! To help commemorate…

Story and Video courtesy of WGXA-TV.